I can’t even…. I hear these words often from fellow mothers when looking at pictures of their children that pop up on Facebook’s time hop.  Like, “I can’t even deal with how cute she was” or “I can’t even believe how much he has grown”.  So when unpacking a box of Christmas things from years ago I came across my Christmas card from 2010 and it is, undoubtedly my favorite.  And, rightly so, I can’t even describe the beauty and joy captured by my children in this card.

On the front was the above photo of my then 3-year-old daughter.  It was taken in our home and she had grabbed my vintage copy of “Roberts Rules of Order” that I kept on a nearby table and the image is priceless.  The unruly hair and vibrant eyes and tiny painted fingernails epitomized the glorious chaos she had added in our lives.  The caption on the card read “Put Joy on your Agenda” because that made so much sense at the time.

The inside of the card carried that joy further with this photo of her being swung through the air by her brother and sisters with the accompanying holiday charge “to make every day a celebration”.

Indeed, I look at these cards and I just can’t even…. believe how adorable, yes, but its more like I can’t even bring myself to send Christmas cards anymore.

It’s not that I don’t wish the best for all of my friends during this festive time of year.  I do, I really do.  And its not that I don’t love receiving cards from them.  I love it so much that I still have a box among those saved Christmas items of the cards they sent to me containing their photos of their cherished children.  It’s just that I look at things differently now that our lives got turned upside down.  In large part because of that unruly, chaotic, swing-from-her-brother’s-branches beauty.   Because from very early on she would hang upside down from every structure and tell us in complete sentences “that makes no sense” and “let’s look at it this way”. 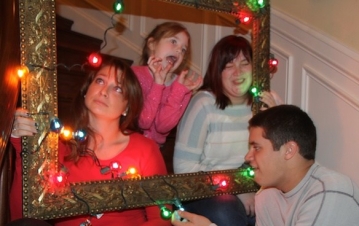 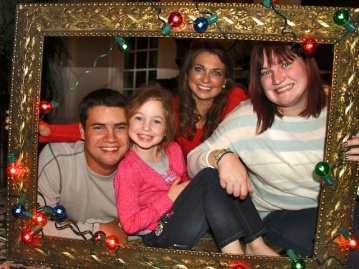 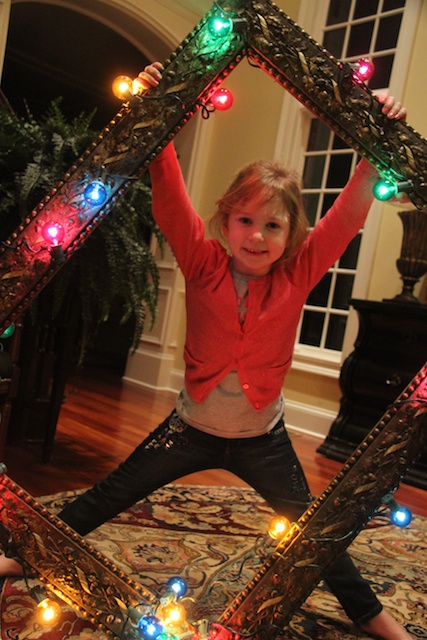 So, let’s look at it this way.  Since I can’t even, I am going to cant.  Because as a verb, cant – the one without an apostrophe, means cause (something) to be in a slanting or oblique position, tilt and as a noun it is a slope or a tilt.  Apparently, within photography, it simply means to get a different angle on the subject.   Taking photos from a variety angles was a necessity at Christmas with my kids because I could never get them to sit still.  To just smile.  To PLEASE let me get that one perfect shot so that I could get on with getting these cards printed and in the mail because there was still so much of Christmas yet to do.  And so I had to tilt and slant and position and bribe and plead and threaten.  And then I would just sigh take what I had and make it work with the right words.  That’s what that most perfect Christmas card came from — the imperfect chaotic joy that got captured on camera.  Yes, I had perfect shots from that professional photo session but I chose these.  Because, even then, I recognized that this is what was real and true in my life. 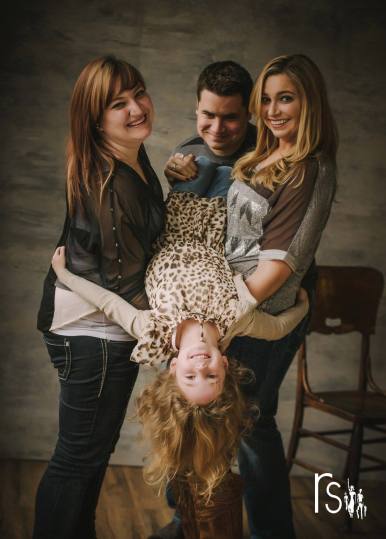 At the time we had these photos taken in 2013 to recreate a version of the 2010 card I knew my world was going to be turned upside down. I felt the universe had me by the ankles and was shaking me down but… it never let me fall.  And what fell out of those dark pockets of my heart was change.  The ground around me was littered with change that had been accumulating like a lifetime of coins collected in a jar on my dresser.  Now when I see a penny from heaven on the ground I know that life can turn on a dime.  When I look at it that way, I can’t view it any other way as positive, even if it was dizzying and disorienting.  I, like my youngest daughter, actually like turning things upside down — whether its a cartwheel (yes, I still can) or an impulse buy of a new set of wheels (yes, I can’t miss an opportunity to work in a reference to my truck) or getting the wheels turning in my mind to figure it out.

Three days ago my oldest called — she had just broken her finger thanks to a gust of wind and car door.  I immediately thought “Oh no, here we go again” and called her sister and brother, warning them to be careful.  Because in early 2014 as I was holding together the pieces of our broken lives I was walking around thinking “can’t I ever get a break?”  Within a few weeks, my oldest broke her wrist at work.  The next day, as I am at the hospital with her, my second oldest tripped and fractured her foot.  The next day I take the oldest for outpatient surgery, bring her home, take the other one to the SAME ORTHOPEDIST to be fitted with a boot.  Later in the week, my son broke his finger playing baseball.  Not wanting to add to my burden, he had the trainer tape it so that he could play on and did not tell me until later.

I went from wanting a break to heal my broken heart to caring for my college age and capable children again.  Cutting their meat into bites and helping them wash their hair and carrying their stuff and driving them to class.  They, literally, couldn’t and so all of my “can’ts” no longer mattered because it was very clear that even though they were adult-sized they were still children affected by the divorce and were still breakable.  I can’t even imagine how today would be if I hadn’t gotten out of my own head to heal them first. 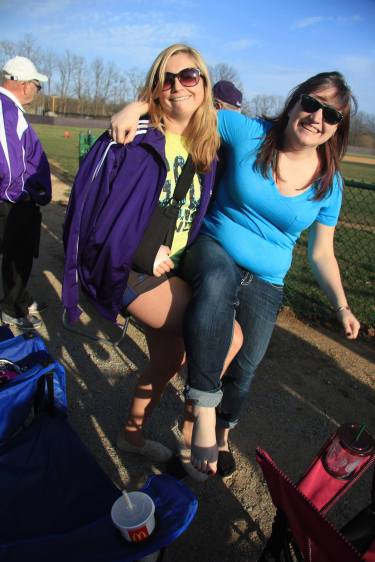 Nearly 4 years later, I know the only thing I can’t do is live in that mindset — because even then, our hearts that felt so broken had held together enough to hold on to each other.  The daughter with the currently-broken finger lives 4 hours away and when she called I told her that I can’t get there in time to help her and she would need to get herself to a hospital.  She did.  And while she was waiting all of her can’ts became cants.   She was texting and sending her brother, sister and me photos of the finger, while focusing on the humor of it.  We are all proud of how she “handled” herself, pun intended.  But, we always had that gift of humor, even if others didn’t get it.  This photo of my girls was taken within days of those breaks and I included it in my Christmas “card” that year that was really just for them because it showed that humor and resilience in the midst of our breaking-apart lives.

That year was my first year without a Christmas card.  My bank account and holiday spirit were both depleted due to the divorce process and so it forced a focus on what I truly wanted to give my children as it could no longer be the pile of presents they were used to.  So, I gave them each a pair of hiking boots with a promise of adventures to come… and I made them a video slideshow of the photos taken during that last year.  The hardest year of our lives.   I wanted to give them evidence of our perseverance and our love and our unbroken faith in each other.   I give it to you now, at the end of this post, as a rerun, of sorts, to demonstrate the biggest cant of all — the angle that is only given to us by time.  With a nod of thanks to One Republics song “I Lived”,  I did it all.  And while can’t imagine doing it all again, I would if I had to.  Because I can.  And because I cant.  Because we lived, we can now live.  The desperate grasp on what we had that was depicted in this slide show has become an embrace of what we can now picture for ourselves.

“Whether you think you can or think you can’t, you’re right” is wrong.  The emotional fallout for those navigating divorce, abuse, learning disabilities, suicide attempts, sexual harassment, bullying and addiction is not a mindset that we can think our way out of.  Especially at Christmas.  There are very real consequences to life events that leave us broken in unfathomable ways and we must live through them to work through them. My ability to look at things from other angles has taught me that even when we can’t heal all the broken parts of us we can cant, without apology or apostrophe, and choose to live broken open to possibility.  I look back at my picture perfect Christmas cards and can no longer feel that I was perpetuating an illusion.  I cant and look at the surrounding photos, instead, that I left on my computer as they captured what was real in that moment.  The annoyingly stubborn, perpetually-in-motion joys of my life.

There are so many moments ahead of me that I can’t waste a minute addressing Christmas cards.  Instead of holiday greeting cards, I will greet you when I see you with warmth and joy, no matter what time of year it is.  I will keep up with you on Facebook,  and know that distance doesn’t mean disconnected.  Because within the unruly chaos of our lives there is an order that cannot be lost when it is founded in love and presence.

Yes, people, put joy on your agenda this holiday season.  But, whether you think you can or think you can’t even, you have the right to cant — and that will help you find something to celebrate every day.