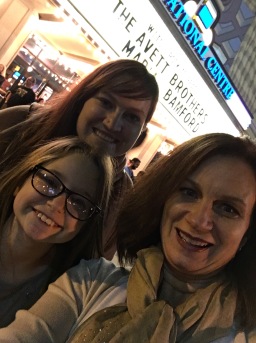 This line, and the ones that follow it, have been rock and rolling through my head since Friday night.  I attended a concert by the Avett Brothers — new favorites for the wit, wisdom and gut wrenching emotion played out on banjos and bass, in an amazing display of musicianship.  I went with 2 of my 4 — the youngest, at 9 and the second oldest, now 24.  The discussion in the car on our way there naturally turned to the election as the older one had voted that day.  She thought my desire to vote on election day a bit antiquated but I defended my stance as it’s an emotional one.  I feel uplifted at the notion where a nation rises up to make a choice in one day — a singular act within a mass of people.  A movement that cannot happen without me.  A mountain of result built upon the pebbles bound within.  Because, well…

This land is MINE.  Toddler mine.  And you can’t take it from me.  My anthem over these last months has been an Avett Brother’s song entitled “Ain’t No Man” and it has NOTHING to do with my divorce (That one is better captured in a toe-tapper called Divorce Separation Blues).  My favorite line is “There ain’t nobody here who can cause me pain or raise my fear cuz I got only love to share.”  This election season has excelled at fear raising and pain inflicting and what has played out across our TV’s and devices, our prayers and our conversations has put me in that toddler frame of mind — or actually, “frame of mine.”

Everyone of us, having been a toddler at one time, can relate (ironically, the ones who still act like toddlers won’t get it).  Raising a toddler in a house of teenagers added a new perspective, to say the least.  It didn’t take long to realize that the teens were just larger versions.  Tantrums, trade-offs and “traffic calming devices” like food, car rides and sleep worked the same no matter the size of the child.  Those years gave me faith that it is all temporary — except for, well, election years.  Because what has played out in family gatherings, community rallies and the process that has put the pomp in circumstance has been a tantrum of epic proportions over control of this land — but, just like in those terrible two’s that precede the terrible teen’s — are they ready for what they are going to get?

Let me explain.  It was early spring when the youngest was not quite 2 and my oldest, at 19, was nearing the end of her first year in college.   It had been a difficult year for her — far from home, on a swim scholarship and not quite living up to the high bar she had set for herself in high school.  I kept trying to inject perspective — telling her that as she got older, victories weren’t just counted in an “A” or a 1st place finish.  That as a first year student athlete, just being there was a win.  Being willing to go back and do it again was a win.  Settling in to a new community and making connections was a win.  But that’s a hard sell for someone who has worked hard to get where she was.  She had called and I was trying to talk her through a momentary meltdown at the prospect of her end-of-season meeting with her coach.

Cradling the phone on my shoulder, I was attempting to wrestle the little one with a loaded diaper on to the changing table.  I was listening, as best I could, but I was focused more on my defensive moves that I had had to develop to counter the toddler’s latest offensive tactics.  She had figured out how to remove her diaper, on her own, without removing her pants — like a magician’s table cloth trick.  So, I had to be quicker on the drawers.  But, I was distracted and slightly disabled with a phone in the crook of my neck and as I was removing her pants, she had the diaper tabs undone and had grabbed the front of the diaper with both hands and pulled.  With a squeal of delight and a little lift of her hips,  the diaper was freed.  What a win.  But in a moment that must be like figuring out where to put the goat that was behind Door Number 2, the diaper cleared the space between her bottom and pants, hung momentarily in the air above her like a victory flag, until the contents unfurled right on her chest.

Yep.  You’re reading that right. Plop!  Just like that, an almost adult sized pile of poo had landed square in the middle of her being, just below her chin, which was just below her nose.  The hilarity of the moment was completely lost on both of them, the toddler and the teen.  I could not catch my breath between the smell and the laughter — and it took a moment to gain control of my little one’s hands and respond to the older.  Didn’t I know that her doom was imminent?  She was in distress!  Distress turned to dismay when I relayed what had just happened and how it perfectly summed up the moment.  How could I have possibly connected those two dots, she wondered?  Don’t you see?  It’s life!  Because no matter what the battle, even in victory we will have to deal with some shit.

It is a coaches job to point out how to improve, no matter what the results of the season are.  It is a parent’s job to motivate our children into wanting to motivate themselves to be continually better.  It is a nation’s job to highlight the magnitude of fear and failures in order to make a positive change.  Like it or not, this display of tantrum and temperament in the current election is a win.  It’s a developmental stage for a relatively young nation that we have to go through.  Yes — it stinks and it is going to take more than a few wipes to clean it up but change is right under our noses, folks!  All you have to do is vote.

Well, that’s not all.  Because the real work starts tomorrow.  Just like the older had to get back into the pool, we have to jump in and get to work.  The real work of parenting isn’t in the diapers, it’s in who is wearing them and we have to remember that we have to model what it looks like to be grown up.  No matter who wins, it is up to us to work together to make it work. In rural communities, group effort can raise a barn.  In close knit communities, group grief can raise a spirit.  In every community, even virtual ones, group energy can raise awareness.  But today, just for today, a singular vote can raise a bar — for what we expect of ourselves and what we demand from our leaders. 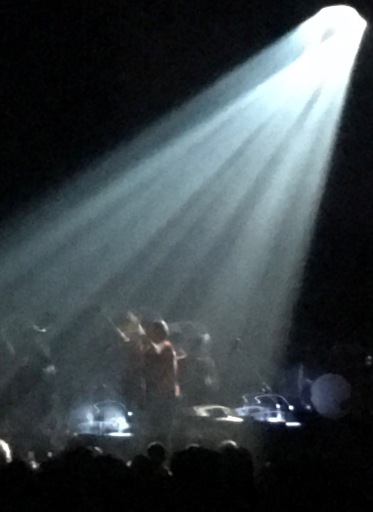 I expected a great concert from the Avett Brothers but I was blown away by a simple song sung 2 hours into their 3 hour show.  The other band members had left the stage leaving the 2 brothers sharing a single spot with just their voices and guitars.  It took only a few notes for the crowd to recognize and join this love song to our nation and the entire crowd sang every word of every stanza.  No one was too proud to sing.  OK, maybe some people were a little drunk… but still, they sang along.  It didn’t matter who the person next to them was voting for.  It didn’t matter whether or not they knew what they were really doing.  They were just one voice joined with others for one song on this one day.  The time for shit slinging is over.  Because, well…

“This land was made for you and me…”

5 replies to …on victory songs and sing-a-longs